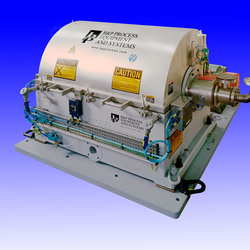 Below is a great excerpt comparing and contrasting a Podbielniak Centrifuge with a disc centrifuge for solvent extraction.

The Disc Centrifuge is a separator whereas the Podbielniak® centrifuge is an extractor. The advantage of a Pod® Extractor in accelerated solvent extraction applications is that the heavy and light liquids flow counter currently to each other giving several opportunities for mixing and subsequent settling.  This results in performance which is equivalent to three to five theoretical stages of extraction mass transfer capability.  Published reports on disc centrifuge systems indicate that in a battery of centrifugal separators each machine is equivalent to 0.75 to 0.9 theoretical stages.

Because of volumetric capacity and the counter-current flow, one D-900 replaces more than 6 disc machines.  This saves considerable floor space for a liquid liquid extraction process.

Disc bowl machines are disassembled and cleaned by hand at a separate location called a cleaning station.  A Pod Contactor is cleaned by removal of specially provided cleanout plugs and flushed out while mounted in its base.  Typical cleaning times for Pod Contactors in Penicillin service (fermented broth with solids) is 3-4 hours nightly; 6 hours once a week, and complete disassembly no more than yearly (often 7+ years elapse between disassembly of the rotors). Note that for a clean service, as in a typical solvent extraction, upkeep is much less frequent.

The Pod Contactor design is fundamentally more stable and maintenance free.  Disk machines rotate vertically, like a child's top, and any imbalance forces are outboard of the supporting bearing structure, very high speeds are required for efficient disc separator operation.  By contrast, Pod Contactors have maximum speeds well below the first critical speed; and are horizontally mounted like a Fly Wheel, with any imbalance forces between two supporting bearings.

The high speed of disc bowl devices causes significant shear accelerating and decelerating liquids.  This causes wear on the disks and in antibiotic production especially adds to the cost of emulsion control chemicals.  Pod Contactors more than 40 years old are still in operation with the original elements.

Now it can be argued that we would be biased towards a Podbielniak Centrifuge being the best at accelerated solvent extraction, but we’ve got the experience and data to back this up.  If you would like to see this in operation we encourage you to run a test at our Saginaw, MI Tech Center.